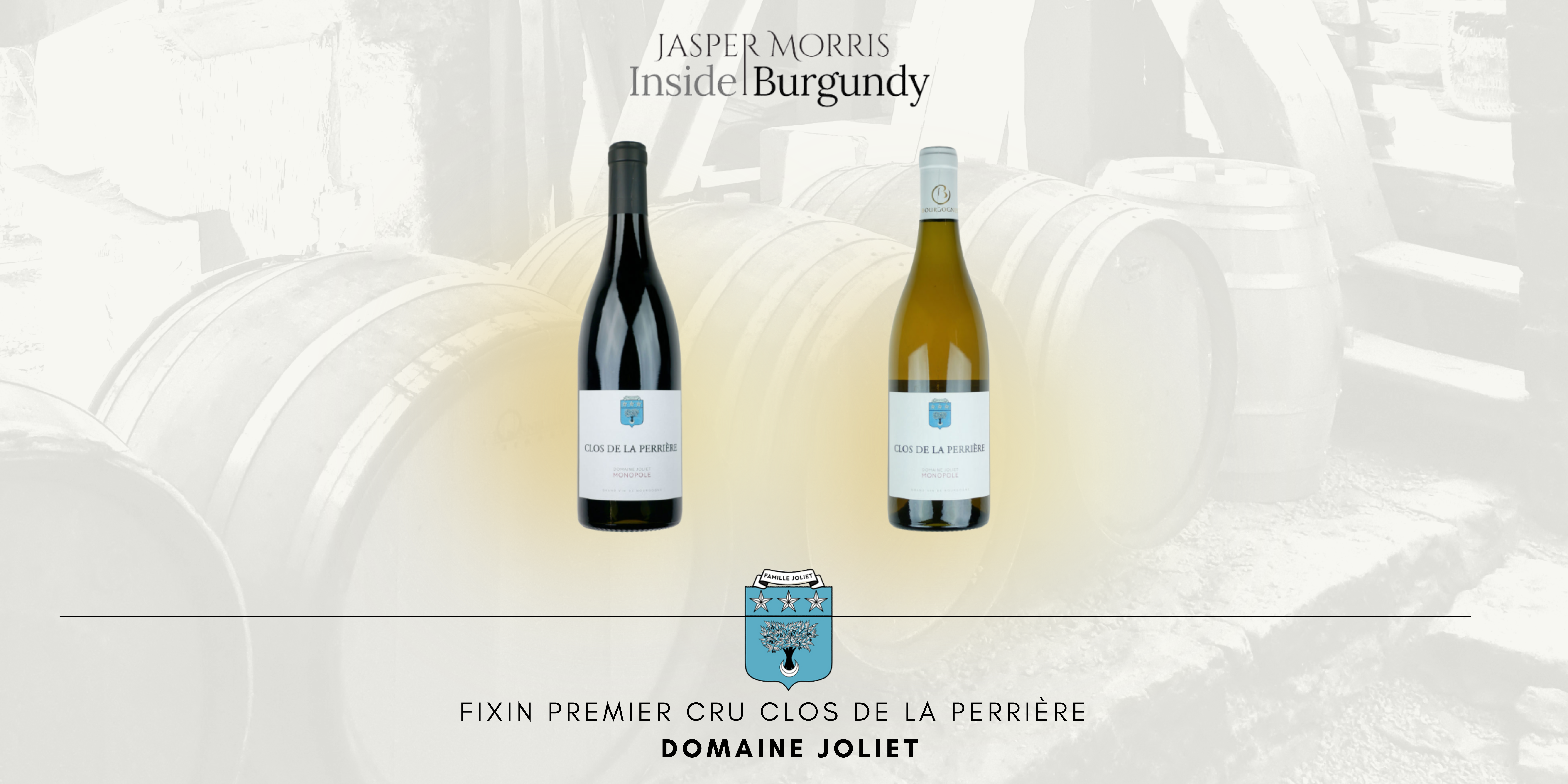 Bénigne Joliet recognises that his dream of his Clos de la Perrière gaining grand cru status is not going to happen any time soon, and the project has been mothballed. There is some interesting work going on here in the vineyards, with one block having been pulled out ready for replanting with top quality pinot noir material, which will be trained to 2 metres high and « tressed » rather than hedged.

Since 2017 the reds have been made entirely with whole bunches.

Picked on monday 1àth September with low acidity, and 13,5% alcohol, 20% new wood from the Vosges forest was used. A bright, fresh yellow in colour with a robust nose, a little bit of warmth. A bit of almond paste here, but the white peach fruit does fill out the middle palate very nicely, and there is adequate acidity as well. Punchy behind, but works quite well in its style. It could perhaps have been picked earlier, but then would have had less personality.

Bénigne Joliet was very frank about the difficulty of making this wine : the fermentation got off to tumultuous start but then stopped before thesugar was quite finished, though the malolactic fermentation was already happening. He took the decision to pull the wine out of the fermenting tanks, press it and let the last of sugar ferment in tank before putting the wine in the barrels. This all sounds quick and tricky, but I found that the wine has turned out well in a warm vintage style. The final alcohol is 13,8%. It has rich, deep purple colour, with aplumb mulberry style of fruit on the nose. On the palate it displays more red that black fruit though, and some firm tannins, which may only just have got ripe. I like this more than Bénigne does!

2017 is one of Bénigne Joliet’s preferred vintages, along with 2012. Still an intense colour, but not quite so primary as the 2018 and ’19? The nose shows more elegance though, with a ligh covering of vanillin from the barrel. 24 month. A fie fullsweet rasberry fruit,the tannins are present, bt much finer, and the wine is consistent whole. The oak adds a creamy note to the back, but very nicely integrated with the fruit. Could start to drink now, but no worry. 13 September. Whites and top reds also frosted.

Picked from 26th September, having lost 30% pf the crop to frost in April. Brisk mid red, with slight vegetal notes showing on the nose at first. This cleans up in the glass, but the 2016 is a somewhat more sombre wine, deepening down into plum fruit. Slightly more than middleweight, medium length. Approachable soon.

Picked late in October! Hard to imagine after the last three vintages. The bottle had been opened the evening before we tasted. A pale and maturing colour, going a bit rubbery now. Some quite dark fruit up front, then livens up behind. Very peppery too. Really quite fun given the difficulties of the year. I like the way it finishes on acidity more than tannins. There is a faint extra oxidation for having been open a day.